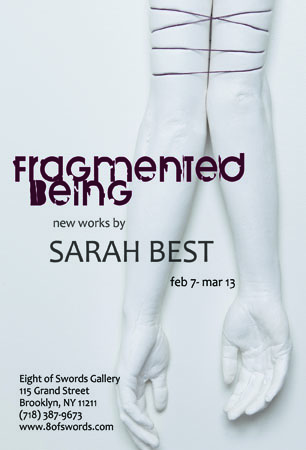 The Eight of Swords Art Gallery presents “Fragmented Being”. a collection of works involving plaster cast sculpture, soft sculpture, assemblage, collage, and mixed medium by artist, Sarah Best. “Ultimately what I hope to create is a moment where the inside and outside collapse, allowing closer consideration of self and other.”

Please join us for the opening night on Friday, February 7th from 7-11pm.

The works of Sarah Best exist at once in physical reality, and suspended in a place of memory and imagination within the mind and body. Best experiments with ideas of corporeal space and the figuration of emotion through gestures of the body, revealing emotional truths that lie beneath our everyday interactions. Her works contain inner self-reflections that render visible a paradox: the infinite and continually changing proportions of consciousness, and the finite physical laws of the body. The result is a stark confrontation with the vulnerability and solitude of the human experience.

After the reception, head over to Passenger Bar (S3rd and Roebling) with us as we keep the party going! Drink specials all night with the show flyer! Be sure to pick one up at Eight of Swords before you leave!

Sarah Best was born in Alaska where she was raised by wild dogs. Having decided she would rather be literate, she escaped to “the lower 48” eventually landing in New York City. After some time she received a BFA from the School of Visual Arts in exchange for a remarkably large sum of money. She now resides in Brooklyn and is prone to saying “fuck” a lot.

The paintings will be on display in our gallery until March 13th.